Our June Staff Spotlight features James Crawford, BWS’s highly sought-after IT Assistant!  James has worked at BWS for over 7 years, adapting to the many changes the company has made during that time.  As a hobby, he enjoys working with computers and different types of technology which helps him thrive in this very technology-focused position. 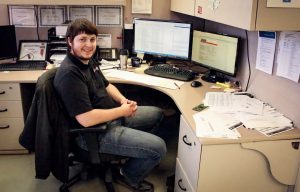 Although BWS is a trailer manufacturing business, there are so many additional factors involved in the production process.  In the beginning stages of a build and in the review/production of data is where James’ responsibilities come into play.  He is well versed in our multiple software programs and data management systems such as Syspro, Microsoft Access and Unipoint.  In a typical day, James may create one or multiple reports, functions or ways to view the massive amount of data that is gathered by our various departments in these systems.  One of James’ favorite parts of his position is working uninterrupted on large projects that result in better information sharing for the company.  It is during these projects that James can throw in his ear phones and listen to his favorite music while he gets lost in his work, as music is another pastime he greatly enjoys!

There is never a shortage of work for James as our IT Assistant, as many departments are dependent on his ability to help fix or program our various systems.  One of the difficulties James notes is the constant change involved in working with technology.  Despite this challenge, James’ coworkers unanimously agree that he is always willing to lend a hand with any task, even if it seems impossible.

Whether James is helping one of his co-workers solve a system problem, entertaining them with his dry sense of humour, or analyzing report options, his work helps keep BWS functioning each day.  Thank you for your hard work and dedication, James!

𝗦𝘁𝗮𝗳𝗳 𝗦𝗽𝗼𝘁𝗹𝗶𝗴𝗵𝘁 I’d like you to meet Kalu! Kalu joins us from his home country, Nigeria, where he previously worked as a welder. In 2019, Kalu brought his welding skills to BWS and started on our Sub parts line. In 2022, he shifted positions and now works as part of…

𝗦𝘁𝗮𝗳𝗳 𝗦𝗽𝗼𝘁𝗹𝗶𝗴𝗵𝘁 Introducing Tony! Tony joined BWS in 2018 and works closely with our finished units. After our finish team completes a trailer, it goes through a detailed Quality Control process to ensure they are dependable for our customers. Trailers are compared to our Workorders, and each trailer’s outer appearance…

𝗦𝘁𝗮𝗳𝗳 𝗦𝗽𝗼𝘁𝗹𝗶𝗴𝗵𝘁 – This month, we are featuring Alfred Cass – most know him as Alfie! Alfie joined BWS many years ago as a Quality Control Inspector. Alfie inspected many trailers over the years, performed root cause analysis, and provided feedback to individuals for areas of improvement. 5 weeks ago,…

You’re looking at 7 new graduates of the NBCC Mig Welding Production Program! Congratulations to all!! 23% of current employees at BWS are grads of the Mig Welding Program. 5 grads of this cohort have accepted jobs at BWS, welcome to the team! The Graduation took place at the Western…