It’s 2018 and we are starting something new here at BWS.  Each month, we will shine the spotlight on a member of our team and tell you a little bit about them. After all, where would we be without our employees?

This January, we want to focus on a long-time employee who is now head of Research & Development for BWS: Larry Berry.  Larry’s spotlight this month follows his acceptance of a Twenty Year Service Award in December – no small feat! 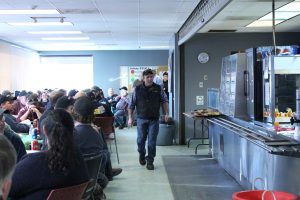 Larry first began working at BWS in 1984 for its original owner and founder, Burney MacDougall.  His first position was in the Machine Shop.  Larry amusingly recalls Burney approaching him one day in the shop to assist with a welding project, but after seeing Larry’s welding skills, told him to stick to machinery.  Despite this humorous encounter, Larry went on to become welding supervisor following a period working in the Parts Department.  After a short time away, he returned to BWS in 1995 to work on the trailer line. 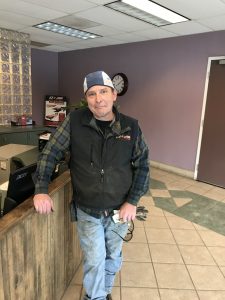 Since that time, Larry has filled many different roles at BWS and displayed a wide range of skill sets.  Consequently, most of the people here would label him a “jack of all trades.” When discussing his vast experience working for this company, Larry says he enjoys the challenge of working across all the departments as it keeps him motivated.  Training others and creating new designs are also aspects of his job that he relishes.

More than anything, Larry appreciates the fact that employees can grow here if they choose to.  In his words, he believes BWS “has been good for the community” as it encourages growth for its team members.  As a third generation company, Larry also enjoys the family atmosphere in the workplace.

With twenty years under his belt, Larry has shown that intelligence, kindness and hard work go a long way in the work force.  BWS thanks you for your service!

𝗦𝘁𝗮𝗳𝗳 𝗦𝗽𝗼𝘁𝗹𝗶𝗴𝗵𝘁 I’d like you to meet Kalu! Kalu joins us from his home country, Nigeria, where he previously worked as a welder. In 2019, Kalu brought his welding skills to BWS and started on our Sub parts line. In 2022, he shifted positions and now works as part of…

𝗦𝘁𝗮𝗳𝗳 𝗦𝗽𝗼𝘁𝗹𝗶𝗴𝗵𝘁 Introducing Tony! Tony joined BWS in 2018 and works closely with our finished units. After our finish team completes a trailer, it goes through a detailed Quality Control process to ensure they are dependable for our customers. Trailers are compared to our Workorders, and each trailer’s outer appearance…

𝗦𝘁𝗮𝗳𝗳 𝗦𝗽𝗼𝘁𝗹𝗶𝗴𝗵𝘁 – This month, we are featuring Alfred Cass – most know him as Alfie! Alfie joined BWS many years ago as a Quality Control Inspector. Alfie inspected many trailers over the years, performed root cause analysis, and provided feedback to individuals for areas of improvement. 5 weeks ago,…

You’re looking at 7 new graduates of the NBCC Mig Welding Production Program! Congratulations to all!! 23% of current employees at BWS are grads of the Mig Welding Program. 5 grads of this cohort have accepted jobs at BWS, welcome to the team! The Graduation took place at the Western…