ACQUISITION IN THE WORLD OF ROAD TRANSPORT

Quebec, Wednesday, February 19 2020- Two years after acquiring BWS Manufacturing in New Brunswick, Hugo St-Cyr, president of Groupe Hugo Corporation Inc., has made a new acquisition and adds another big player to his network: Stargate Manufacturing located in Milton, Ontario, whose annual revenue is approximately $30 million. The objective of this businessman’s expansion plan is simple: to become the benchmark in the field of specialized semi-trailers in North America!

The transaction, for which talks began over 12 months ago, was sealed yesterday in Milton in the presence of brothers Domenic and Lorenzo Zangrilli, previously co-shareholders of Stargate Manufacturing. Founded in 1998, the company’s reputation is undeniable. Undisputed leader in the world of aluminum end dump, Stargate products have been spreading in popularity with numerous customers in North America for more than 20 years. The new owner, Hugo St-Cyr, intends to carry on and consolidate the strength and credibility of the brand by fully maintaining the company’s operations in Ontario and preserving the 80 existing jobs.
Meanwhile, over at BWS Manufacturing … 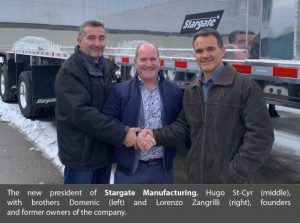 In December 2017, Hugo St-Cyr bought 75% of the shares of BWS Manufacturing in New Brunswick while offering his new partner and former owner Randy MacDougall to keep 25% of the shares and occupy the position of chief operating officer. Although Hugo St-Cyr has now bought the last quarter of the company’s shares last December, the two partners continue to collaborate, since Randy remains active with the company for special projects. Since the merger of BWS Manufacturing’s activities with Groupe Hugo Corporation Inc., the company has hired 20 new employees in addition to having had a record year for sales in 2019. The adventure keeps growing and the company has experienced an 85% increase in revenue over the past two years.
If everything goes according to the group’s strategic plan, Stargate Manufacturing should also experience the
same kind of progress. Hugo St-Cyr already plans to add 20 to 25 new employees within the next 12 months to the existing team due to the high demand for the company which designs and manufactures aluminum dump trailers, renowned for their light weight and durability. In Quebec, Remorques Lewis, part of the Hugo Corporation Inc. group, will distribute the Stargate product line. Transit Trailer already acts as an authorized distributor for Ontario. The rest of the continent will be served by the group’s distribution network, which also offers a wide range of high-end specialized semi-trailers in all areas of transport-related activity.

The Hugo Corporation Inc. group, which now owns the manufacturers BWS Manufacturing (New Brunswick) and Stargate Manufacturing (Ontario), in addition to the distributors Remorques Lewis and Trailer Shop Canada, intends to continue its momentum and hopes to make its next acquisition in the United States, allowing it to further increase its market share in North America. All together, the group’s companies now have sales of $80 million and employ 215 skilled workers.

On June 5th-11th, we recognize #TrailerSafetyWeek. Every year this campaign aims to: Increase awareness about the importance of being committed to trailer safety Educate end-users about proper trailer maintenance and usage Create a stronger partnership and alliance between stakeholders of the industry including trailer dealers, manufacturers, and end-users. BWS is…

After months of planning, engineering and manufacturing, we are thrilled to announce the release of our newest product:  our first ever BWS Live Bottom Trailer!  The decision to create our own version of this aggregate-transporting product arose from our customers’ needs, first and foremost.  Developed with the construction industry…

Spring is nearly here in Atlantic Canada.  To prepare for the change in weather conditions, scheduled weight regulations have been issued for New Brunswick, Nova Scotia, Prince Edward Island and Quebec. For information regarding these seasonal regulations, please refer to this helpful guide issued by the Atlantic Provinces Trucking Association:…