We are half way through February and things are busy here at BWS!  It’s 2018 and everyone in the plant is feeling industrious with multiple projects underway.  Although there are many new and exciting things happening this year, some things remain the same in our plant.  As always, our tag trailers provide consistent work among the new models cropping up in our various work stations.

Our tag trailers, which include our ARTs, NTTs, FDNTs, and ANRs, are an integral part of BWS.  Consequently, our staff spotlight this month ties in closely with this popular product.  Troy Smith and Danny Demerchant have each worked on the tag line since May of 2017.  Although neither of them have worked at BWS more than a year, they have shown incredible workmanship in their roles at the company. 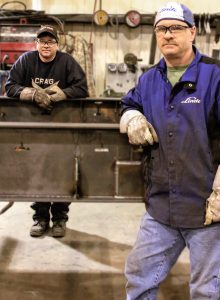 Danny (left) and Troy (right) on the tag line at BWS

The skill Troy and Danny display in their work is unique and multi-faceted.  In Troy’s words, the two welders “work with each other and not against each other.”  Despite their short history welding tag trailers, they have established an efficient method that requires little verbal communication.  The first steps they take involve beam arrangement, cross members, tacking, and axle placement.  The pair will then measure portions of the  beams in relation to the a-frame and axles, make eye contact at each step, nod for approval, and move on.

Troy and Danny transition easily from one task to another throughout the building procedure.  Danny claims the key to their success is that they “keep out of each other’s way” and don’t necessarily need to speak much during the process.  With that said, it takes a special kind of team work and communication to yield such efficient results.

Another visible factor in their success is that Troy and Danny operate at the same speed.  They both agree that “they put their heads down and finish the job, no matter what it is, and they never leave a job half finished.”  For this, they are often recognized by other members of the BWS team for their hard work.

In conclusion, BWS would like to thank Troy and Danny for their dedication, their skill, and their ability to motivate those around them.  Job well done!

On Friday May 13, we celebrated MORE graduates of the Mig Welding Production Program. This concludes the 5th cohort of students. Congratulations to all who graduated! We are excited that we were able to hold the event at the Western Valley Multiplex. The venue is lovely and without covid restrictions, students…

Last week at BWS, we celebrated the most recent graduates of the Mig Welding Production Program. Congratulations to all who graduated!  Students learned a technical understanding of arc welding, welding safety, power sources, and much more! The course concentrates on MIG welding of Steel/Aluminum and offers onsite work and training here…

Our Staff Spotlight for the month of August is our extremely talented Lead Hand, Nathan Nicholson!  Nathan has worked at BWS for 18 years and counting.  He began his journey with the company as a Finish Off Technician when our facility was much smaller than it is today.  Currently, Nathan…

Last week, we had another successful summer shut down BBQ for our staff!  Each year we take vacation during the last week of July.  Our team works hard each and every day, so why not enjoy this beautiful New Brunswick weather? With many new projects under way, our staff have…